I’m in the middle of a tense conversation and the other person says, “You hurt my feelings and I’m really upset.” I’m flabbergasted! I never meant to hurt anyone and I certainly wasn’t trying to hurt anyone’s feelings. Why should I apologize? Isn’t apologizing taking responsibility for someone else’s feelings? I can’t held be responsible for other people’s feelings and reactions, can I? Maybe I can just say something noncommittal like “I’m sorry you feel hurt.” and they can move on. Right?

The answer is, it’s complicated. 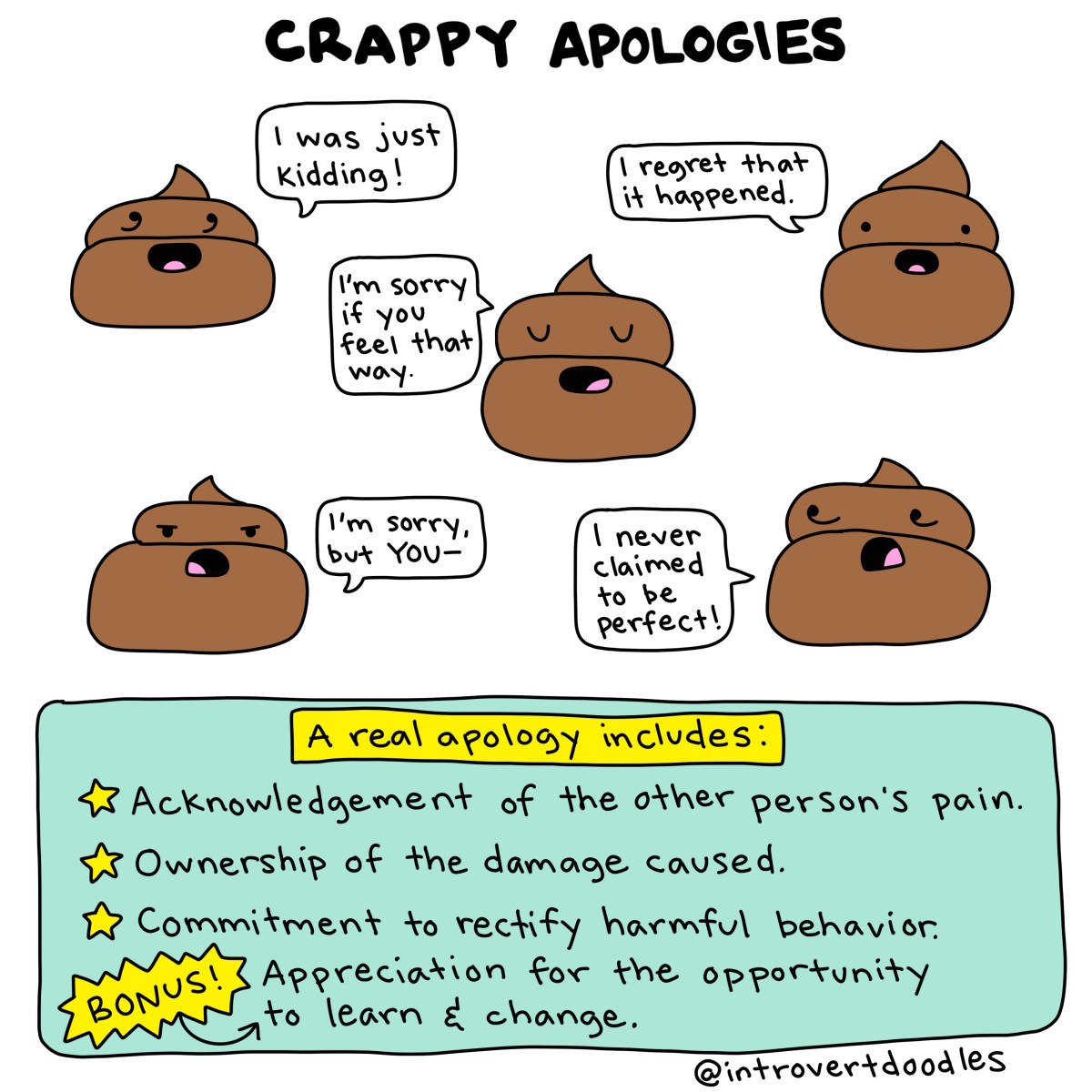 Experiences are always valid; they don’t have to be “true”

It is a complicated truth that different people experience things differently. The same exact words could be said using the same body language, tone and so forth, and yet two different people’s reactions will always be different. Why? Because we all come to that moment in time from different sets of lived experiences, assumptions, cultural backgrounds, and sometimes traumas. A statement such as “I’m not afraid to walk home at night, why are you?” might be experienced as insensitive or even invalidating to someone who identifies as female or a gender minority, but not necessarily by a white cis-male. A statement such as “Why are people afraid of cops? Just follow the law and you’ll be fine!” would likely be experienced as invalidating, dismissive, and even gaslighting to a person of color who lost a friend/relative/neighbor in police situation, but not to a white person who has never been in fear for their life by an authority figure.

In both these cases, the “facts” are that the recipient of the speech has (likely) had vastly different life experiences which inform their experience of the statement. Does this mean they are “too sensitive”? No, it simply means they experience things differently.

And therein lies the complication. If we all experience things differently, then where is accountability in speech? Why is a comment said to one person “a joke” and another person “hate speech”? For simplicity, we might be tempted to focus on the intent of the person who spoke.

The simplest solution is rarely the right solution, especially when it involves people. People are messy. People are inherently feeling beings that think.

Let’s look at the first example, of someone questioning the experience of being afraid to go out alone at night. Unless the person is a true psychopath (note: highly rare!), it is unlikely they actually meant harm. In fact, in most cases when offense or harm is caused, I would wager it’s unintended. While people can be ‘mean’ it’s rarely that a person in that moment actually want to hurt someone. It’s more often the case that either they didn’t know harm could be caused. Sometimes it is the case that someone simply doesn’t care, which is still not the same as intending harm. Sometimes we don’t care simply because we can’t. We’re too tired or too angry to care whether what we say or do impacts someone.

So you may ask, why apologize if we didn’t mean harm? Isn’t the other person responsible for their own feelings?

Empathy is not endorsement

The question I would ask in return is what do you have to lose by apologizing? What are you risking? When we answer this honestly, we often discover that the reason we feel we “shouldn’t” apologize is because we think the other person’s experience is “wrong” because it isn’t ours and we don’t want to endorse their experience. Because we are afraid to endorse conflicting viewpoints, we resist empathy for those unintentionally harmed by us.

There is a delightful podcast I recommend for everyone, called “Conversations with people who hate me.” The host, Dylon Marron, recently did a TED talk, called Empathy is not Endorsement, which tackles this very important issue.

Essentially what Marron argues is that we don’t have to agree with what someone says to have empathy for them. It doesn’t cost us anything to genuinely hear the “other side” even if—especially if!—it contradicts something we value and believe.

Once you free yourself from this notion that to empathize is to agree (or endorse) a viewpoint or experience, the art of apology and the usefulness of it becomes easier to see.

Assume best intentions; and recognize that impact is more important than intent

We all say and do things that hurt other people, and usually by accident. If we start with the premise that all experiences are valid (including the experience of hurt) and that to empathize with someone does not imply that we accept any labels, judgement, or values they ascribe, then apology becomes easier.

One of the ground rules I like to use for group work and facilitated discussions is this: “Assume best intentions; and recognize that impact is more important than intent.” What this does is it reminds both parties that they have a role to play. Each person in a discussion (or argument) is called in to their highest self, to assume the best intention of others (i.e. to assume that they don’t mean any harm caused). And it importantly recognizes the fact that experience is still valid, that the impact of words or actions can still be harmful regardless of intent and accountability for that harm is important.

What this approach allows us to do is recognize the importance of a sincere apology in forging a connection between two people. While it is hard, I set it as my goal to not resort to “crappy apologies,” but rather to challenge myself to use apology and conflict as an opportunity for me to learn and grow.

Here’s an example from my own life. I was in conversation with a person, let’s call M. I was coming from a place of compassion, empathy, and concern and tried to express support for him verbally. His experience was that I was condescending. Now, I could have responded by defending myself (“I wasn’t being condescending!”). And, in fact, that was my first emotional response. But then I remembered the truism that impact matters more than intent, and so I paused, apologized, and asked what I could do differently. I said, “I see that what I said made you feel like I was being condescending. I’m sorry. That wasn’t my intention. Can you tell me what would help you feel more supported? What can I say or do next time that would feel more supportive [and not condescending]?”

My apology and offer to commit to a more supportive approach opened up the conversation to a place where M could better see my intention and where I could also better understand how differences in tones may impact different people. I switched to a tone which he experienced as more supportive in that moment and the conversation continued from there. M later reached out to apologize for the impact of his words, and to thank me for my support. It was a learning experience for us both in the nuances of intention and impact.

Next time you’re in an argument and you find yourself resisting a sincere apology, ask yourself what you’re trying to avoid endorsing. Is it a view about yourself or someone you love that you can’t accept? Is it a strongly held value or belief? What do you lose by choosing to empathize with that person anyway, knowing that empathy doesn’t require agreeing or endorsing the other person. What do we lose when we allow ourselves to prioritize reducing harm experienced by others over the needs of our own sense of self?

What happens when we choose the path of sincere apology?

The importance of apology in conflict resolution

3 thoughts on “The importance of apology in conflict resolution”